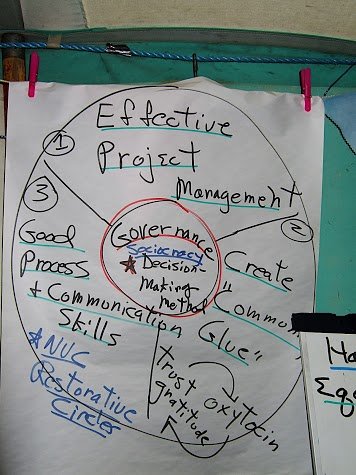 You are here: Home / Uncategorized / Our visit to UK Cohousing Spring Gathering

The sun shone on the UKCohousing Network Spring Gathering at the Threshold Centre, Gillingham, on 17-19 May.  This turned out to be a good thing, as meetings were held in a marquee and food was served from a gazebo, pitched on Threshold’s central grassed area.

There were 40 visitors, including Hugh, Jane T, Raja, Sally and me from Bridport Cohousing.  On the Friday afternoon, after some UKCN business, we were introduced to the key speaker, Diana Leafe Christian, who has written 2 seminal books on community life.

Her teaching is based on what she has learnt over many years of working with communities.  She began by speaking about a fictitious community, describing the various things that went wrong, weaving into this teaching on various forms of consensus decision making and sociocratic decision making; with the latter proving to be invaluable to the community.  The ruse in this was that the fictitious community is her own community, Earthaven, an eco-village in North Carolina.

Diana taught four sessions on Saturday on ‘Creating a Successful Cohousing Community’.  After years of working with consensus decision making, she now teaches three methods of decision making, The N Street Consensus Model, Holacracy and Sociocracy.  It was great for our group, who have worked with Sociocracy since July 2010, to hear about its application in various contexts.

The day was filmed and we’ll flag up when it is available.  In the evening there was chat, music and an auction of various cohousing ‘opportunities’.  We waved goodbye to Raja who cycled home that evening.

On the Sunday, after an UKCN AGM, we had to choose which workshop to go to.  Although I felt I ought to go to the Affordable Housing workshop, I chose to go to Diana’s and again, she was funny, engaging and an excellent teacher; her diagrams are so full of information they do become a mess.  She did a crash ‘Introduction to Sociocracy course,’ and at the end apologised for not having time to tell us about the Policy Forming Process, ‘which is so cool’.  Obviously our group wanted to know about this.  So at lunchtime, we had our own tutorial with Diana; joined by James Priest who was also there for the weekend.  She covered the policy, which is really cool and fills a hole in our practice.

Diana ate little lunch and when prompted to eat she said that she much preferred talking about her very favourite subjects, getting community working and Sociocracy.  We probably tried the patience of the Threshold people as they cleared up round us, but it was too good an opportunity to miss.  In fact, you could say the same thing about the whole weekend.